Full service craft forum where you can request help, showcase your project, promote your site, blog or shop and connect with other craft addicts.

Band-O-Gear: a utility bandolier of pockets and useful tools.

Band-O-Gear: a utility bandolier of pockets and useful tools.

So I had an idea this past summer, figured I'd open with this first and share it here. It'd been kinda in the back of my mind for months but I wanted something like a utility belt but not around the waist. Sorta like a utility harness but with modular pockets. And something easy to slip on before I go out.

Then I stumbled upon this item from the early 2000's. 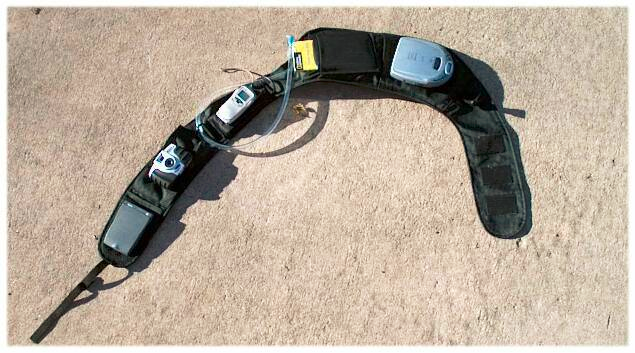 This is the original Band-O-Gear a wearable bandolier designed with cross country cyclists in mind with pockets to hold stuff and velcro attachments as well as a built in water bladder... the company no longer makes stuff like this and the last record I had was 2008. But I didn't let it get to me, instead I decided that if I can't buy one I'll make one!

So I got to work learning the sewing machine I'd gotten for chistmas and got a couple suitably stretchy belts as well as an old semi-broken pair of suspenders for parts. Up to this point I'd only ever hand sewn stuff so It was a trial and I even managed to break a couple sewing needles due to the thickness of the materials...

But after a lot of trial and error I constructed my own with modular pouches, a friend helped me adjust it to fit well and I loaded the pockets up with all sorts of stuff as well as attached my Leatherman to it which I received for my birthday last year and constantly proves useful. 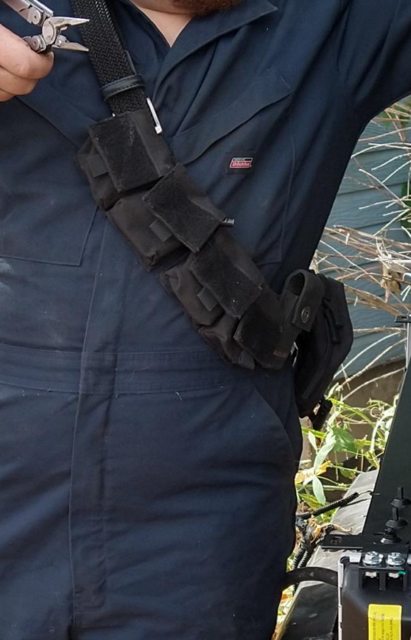 Altogether I've found this combination highly useful when working on just about any project and so with the leatherman as the core and since I primarily work with electrical stuff I've included in the pouches the following.

A roll of electrical tape
A miniature stick lighter for heating stuff up like said tape or heat shrink.
A complete watch and eyeglass repair kit (see the big pouch).
A pocket sewing kit
A magnifying jewlers loupe that I can attach to my glasses for 5x and 10x magnification. for inspecting things more closely.
A tube of superglue.
A roll of bandages
A USB type C charger
A flash drive with any research or schematics I might need on a project.
A set of lock picking tools. (I've had several friends get locked out of their homes/apartments so I picked up this skill to help them.)

Outside the pockets I also have a couple loops I put on it to hold a monkey wrench and a pen that doubles as a body camera in case there's some sorta legal problem. I rarely have to use it but it's useful to have when I'm doing something like letting someone back into their home.

There's still room for expansion too but that's what I have so far. I also recently learned how to make my own pouches so I may re-structure the entire thing.

There hasn't been a single time I've had a problem that my Band-O-Gear has not been able to solve handily since I constructed it. From replacing wires on my jeep to sewing the bow's back onto a friends dress after some asshole tried to yank them off to simply adjusting someone's glasses after they've started to get a bit loose so it's been worth it.

Awesome Site's I'm a part of.

That's really clever! It looks like it would easily tuck under a coat to be hidden if necessary.
Top

I love this idea! I have never seen something like this before but I can see where it'd have a good following. Has anybody else used one or even made their own version? Have you customized it to fit your own lifestyle?
Top

KMO Studio wrote: ↑January 18th, 2023, 8:24 am That's really clever! It looks like it would easily tuck under a coat to be hidden if necessary.

It does actually, I frequently wear it under my patch/pin jacket with the jacket open so I can get to the pockets quickly.


ZandraJoi wrote: ↑January 18th, 2023, 11:59 am I love this idea! I have never seen something like this before but I can see where it'd have a good following. Has anybody else used one or even made their own version? Have you customized it to fit your own lifestyle?

For me customizing it was figuring out what pouches/pockets to add. I'm always trying out new ideas to see what to put in what pockets.

one of the cooler features of the pouches that are on it is that they're modular. I can actually put more of the larger pouches on it and attach the smaller pouches to them for example. But the detractor is that it adds bulk. I recently got my hands on some sewing patterns to make new kinds of pouches though that I'm thinking of trying out.

The current pouches also have Velcro on the front so I'm thinking of adding stuff that way as well.

This was the original Design I'd come up with before making it.

Before adjusting it I'd actually taken it with me as a trial run on a trip with a friend to try out the functionality and found that more often than not it proved useful simply as a quick access storage space for holding things like cards, tickets, small stones, and other things I could fit in the pockets leaving me hands free to hike, climb rocks, or in one case make a roadside repair with the pouches holding various sockets, bolts, screws, and driver bits while I was working.
Awesome Site's I'm a part of.

@SpookyZalost You seem to have a knack at coming up with ideas on how to build this. Do you think you'd make others for family & friends? Or perhaps try to sell them?
Top

@ZandraJoi maybe down the road when I'm better at sewing I'll throw some up on Etsy. Once I've got more than a prototype done and have refined it a bit. I'd imagine a piece of practical, durable, easy to wear, not in the way storage would be exceedingly popular.
Awesome Site's I'm a part of.

Return to “Showcase Your Work”