Full service forum for all crafters where you can request help, showcase your project, promote your site, blog or shop and connect with other craft addicts.

When my mother died in February of this year, my sister and I were going through her clothes and found difficulty in parting with the items we saw her wore the most. I remembered seeing somewhere online about taking clothes and turning them into Memory Bears and brought up the idea to her. We agreed to have one made for each of us along without our children. Then Covid happened. I never got around to contacting anyone to talk about price and decided I would try to make the bears myself since I had time and it would save money.

A friend of mine on Yaketys posted a video that suggested using interfacing to help stabilize my fabric and make it easier to stuff the toy. That was a very helpful piece of information! Once the stores opened up again I went and bought my interfacing and a 5 pound box of fiberfill (enough for 6 bears and then some!).

You download a PDF file to your computer and print out the pattern pieces. I printed my pattern at 75% of the original size and I'm glad I did because my bear turned out to be bigger than I had in mind when I first thought of having memory bears created. My bear turned out to be 13" tall and 13" from top paw to top paw.

Here is the first bear I created: 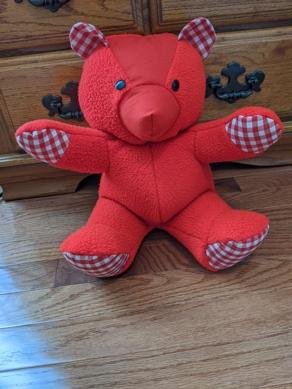 The fabric I used was from two of my mother's bathrobes that she wore for as long as my sister and I could remember. One for warm months and one for cooler months. The thread and buttons came from my mom's sewing box.

I was hesitant about beginning this bear because I'm a novice at using my sewing machine but then I looked at this video and the lady actually shows you step-by-step how to sew and assemble!


The pattern was confusing until I saw the video and then it made perfect sense! I cut out my printed pieces and glued them adding 1/4" seam allowance onto cardboard and cut those out. Then I traced onto my fabric and interfacing, sewing the interacing onto the fabric and putting each pattern piece and fabric into its own ziplock baggy labeled with the pattern number and what piece of the bear it was. This made finding things so much easier.

Because of the video I can rate this pattern A- and the video I give an A. The reason the pattern gets an A- is because I cannot figure out one part of the back leg no matter how I did it because it ended up longer on the outer edges than was needed. That sort of messed up my feet each time so if you ever make this bear let me know if you had a problem because I'd love to work it out.

I have 2 orders for bears now and I can easily get through the sewing part without watching the video.

Rating:
Pattern ease:with video A-
Did it turn out like the photo from the website? Yes, even though I altered the color scheme on all my bears to match what I wanted in my head.
What did I like about the pattern? That it was a cute bear.
Would I recommend it to others? Absolutely! If you have patience and know your sewing machine even a little bit you can manage this.
Cost of pattern: Free
Cost to make project: Approximately $6 since I had most of the materials on hand already.
Top

Re: The HowJoyful Teddy Bear Review

That's a detailed tutorial and I have decided to make a big teddy bear.
I love teddy bears and I never thought of making these memory bears before and the idea is just too cool. I am going to try this out soon. I have already ordered the eyes and fiber fill.
Hopefully, my bear would be half as good as yours

When it comes to craft, my skills are close to none.
Top

Re: The HowJoyful Teddy Bear Review

Claraviolet wrote: ↑September 10th, 2021, 5:46 am That's a detailed tutorial and I have decided to make a big teddy bear.
I love teddy bears and I never thought of making these memory bears before and the idea is just too cool. I am going to try this out soon. I have already ordered the eyes and fiber fill.
Hopefully, my bear would be half as good as yours

When it comes to craft, my skills are close to none.

The hardest part is keeping track of which piece is which part of the pattern so keep things marked and well organized and you'll have no problems.
Top
Post Reply
3 posts • Page 1 of 1