Full service craft forum where you can request help, showcase your project, promote your site, blog or shop and connect with other craft addicts.

I was looking for something fun to knit for my husband's birthday and saw a few Beer Cozy Mitten patterns, and as I searched I found one that seemed the simplest among other patterns, so this is the one I made and am reviewing: 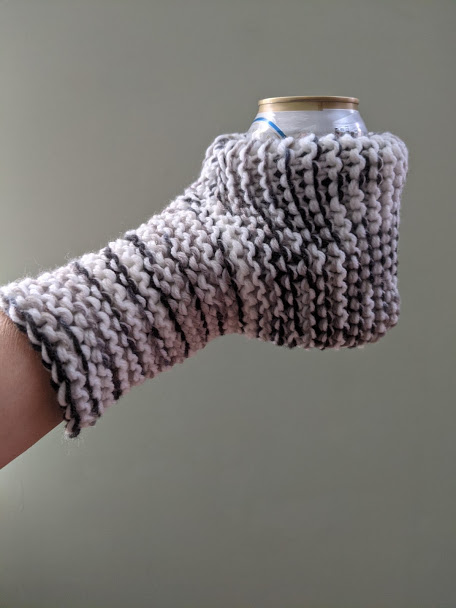 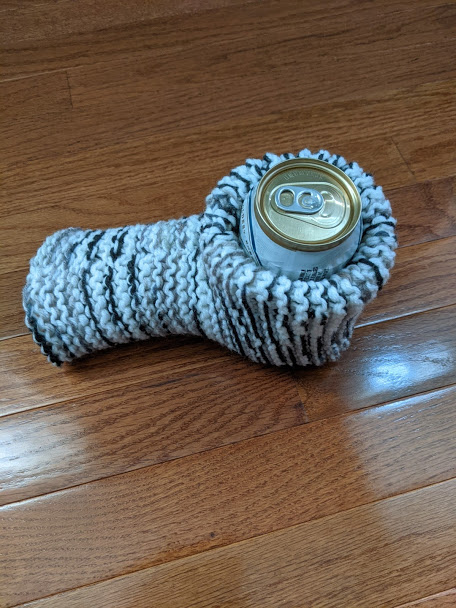 There are two videos to help you out:
How to knit the beer mitten:


and how to assemble the Beer Mitten:


Included in the pattern are the instructions for the regular mitten but I did not do that because I ran out of yarn. I might go back someday when I get more yarn to construct it, but for now I am just reviewing the beer mitten part.

I did not have the same exact yarn that was specified in the instructions but made sure that my gauge fit when I used 2 strands of 4-ply acrylic and size 8 knitting needles (since my size 9 needles were missing). It was actually slightly larger than the cm project map sizing but that's okay since this was for a man and I needed it to be a little larger. If I needed to make an even larger size mitten I would go up to a size 9 or 10 and not worry about the gauge that was in the instructions. Using 2 strands of 4-ply meant less stretch for the yarn so that is also something to consider.

The pattern was really easy at first(I did not do the stripes), but when it came to adding the little triangle part I messed up at first and put it on the wrong side. I'm glad I caught it before I got too far into it and had to rip it out and pick up my stitches. Keeping track of which side was the "right" size of the material became confusing for me and I probably should have marked it with a safety pin.

I don't think I could have figured out the assembly without the video so please watch it so you can know exactly how each part fits and what to sew. I sewed mine inside out so that the look on the right side appeared better and more finished.

Now that I know how to make these, I think that if I made any others that I would use larger knitting needles and cast on 2 more stitches. Using 2 strands of 4-ply makes for a very warm mitten which is good if you're holding a cold beverage in winter weather. Since I was bad about keeping track of which side was the right side my binding off stitches looked awful near the triangle part so making it again would result in a cleaner look.

The garter stitch throughout made for a quick knit once I got going on a new section and even ripping out a small portion and starting over allowed me to knit it in a day (hours? I'm not sure but under 6).

If you're looking for a fun gift to give someone that they probably don't have, then take the time to knit this up. Buying on Amazon or Etsy would be at least $12.99.

Rating:
Pattern ease: B
Did it turn out like the photo from the website? I used different yarn so not exactly although the form is the same.
What did I like about the pattern? It was simpler than some of the others I saw and there were videos to help which made it even easier to construct. What I didn't like about the pattern is that it's not for a large male hand so I would suggest increasing the stitches.
Would I recommend it to others? Only if you're an experienced knitter. It's not an easy project for someone just starting out. Plus, keep in mind it's more for a female sized hand.
Cost of pattern: Free
Cost to make project: Free for me since I had leftover yarn to use.
Top

Oh wow! That's so creative! We don't drink much beer so wouldn't use it regularly. ...but what a conversation piece this would be! Thank you for sharing this beer cozy mitten review.
Serene Distraction
Your Online Creative Arts Community
http://serened.proboards.com
Top